If Banzai, Shenzi & Ed are any indication of the mental faculties for the entire population of hyenas, then I guess my question could possibly have an obvious answer. But let’s look at it anyway, shall we? As Scar lays out his master plan to take over The Pride Lands, hundreds of hyenas sing in chorus how excited they are for the coming coup. All these minions are seen happily marching in formation as their leader looks down on them proudly from above.

Did you catch that? There are hundreds of hyenas. So I ask you, why did they need Scar? As I said, simply thinking about it from an organizational perspective, if they were all just brainless savages, a leader with intelligence would be necessary to coordinate any collective action. Yet, that could only be the right answer if the odds were more or less equal…and they definitely aren’t. Mufasa and the 8 lionesses wouldn’t stand a chance against an unorganized onslaught of even 50 hyenas.  And it’s not like the beasts have to operate firearms or pilot aircrafts, they just have to scratch and bite and they seem to have that down already. There has to be another reason…maybe it was a personality thing? Sure, the hyenas always enjoyed a good laugh on their own, but it was only Scar’s dry wit that could truly make them roar.

I was watching Beauty & the Beast the other day and the scene came on when Cogsworth is taking Belle on the castle tour. You remember it? Down one of the hallways they encounter a dozen or so suits of armor. Cogsy makes a lame joke and then rudely commands these knights to return to their positions. Cut to near the end of the film, when the crazy townspeople led by Gaston march to kill the beast and who is left to defend the castle? The servants?! Where are all those knights? These guys would be nearly unstoppable and could easily route the town’s butcher, baker & candlestick maker yet they are strangely absent from the foray. I don’t blame them though. If I was a knight and a castle servant bossed me around, I would make sure he became cognizant of his error when the time was right.

So why is one more valid than the other? Aladdin sits in his street rat villa with an amazing view regarding the Sultan’s palace and opines: ‘Someday, Abu, things are gonna change. We’ll be rich, live in a palace, and never have any problems at all.’ We wipe a tear from our collective cheeks and nod our approval. Flynn Ryder (aka Eugene Fitzherbert) jumps on top of a bar and croons his dream consists of ‘an island that I own, tanned & rested and alone surrounded by enormous piles of money.’ But we cross our arms and assent when the hook-handed ruffian responds ‘your dream sucks.’ But why? Aren’t they the same dream after all? 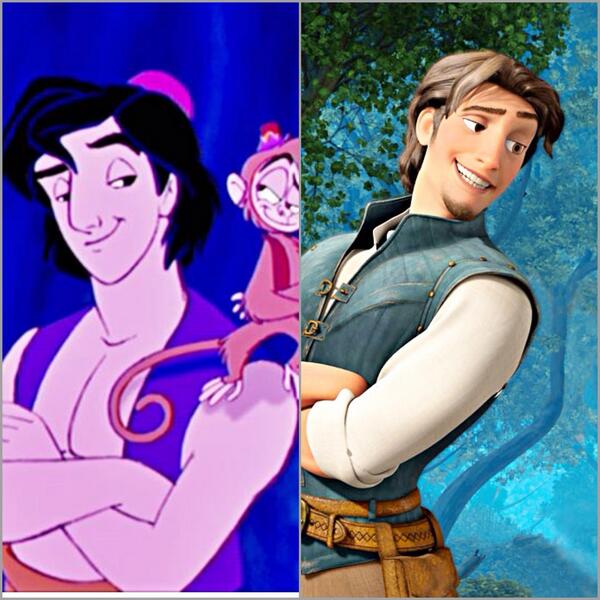 Aladdin and Flynn have a lot in common. Both come from poor, orphan backgrounds that led them to thievery as a means for survival. They both deceive the princess that they will later marry. They both even wear vests for goodness sakes! And both have dreams that center on a lavish lifestyle that has absolutely nothing to do with love of any other human but themselves. Sure, Flynn’s dream specifically has him on an island by himself, but there are no others mentioned in Aladdin’s fantasy either…besides his monkey.

Now, Aladdin does come around quicker to add love of an attractive lady into his happy ending so that is a definite plus for him. But Eugene sacrifices his life to free Rapunzel from the grips of Mother Gothel. That should put ole’ Eugene in lead, right? Then why do I still feel that Rapunzel could have done better if she just wouldn’t have latched on to the first man she met?  And why do I have a less unsettling feeling about Aladdin becoming Sultan than I do about Eugene becoming King…even if he had limited power under Rapunzel’s rule. Why is that? Is it just me?

I honestly have questions about nearly everything surrounding Prince Eric’s statue. I’ve never been to a statue unveiling before, but I can tell you the ideal location of said event would be on land, not on a ship. Just the logistics of getting something of that weight on and off a ship would be ridiculous. Not to mention that once placed it would need to stay in the same location for the entire voyage making the surprise element of the gift next to impossible. And I think Grimsby lucked out that Eric didn’t hit it off the Princess of Gloucester, otherwise that would have been one strange wedding gift. ‘To celebrate this happy union, I’ve commissioned a stone statue of just Prince Eric.‘ I bet both his new wife and in-laws would have been a little nonplussed regarding that tribute.

Then after the ship sinks, we are supposed to believe that Flounder, a 9″ long tropical fish, is able to move the 10 ft tall stone effigy underwater and somehow maneuver it through a tiny cave opening to gift it to Ariel? It is preposterous to believe he could achieve such a feat even if the figure were made out of paper mache, let alone carved limestone which is more likely. Unless there is a fish that is yet undiscovered possessing opposable digits for grasping and incredible strength & dexterity, I’m not sure who could of even helped the little guppie with such an undertaking.  Maybe that’s one of the reasons that Triton destroyed the statue, the whole thing didn’t make sense to him either!

We don’t know a great deal about Ms. De Vil. We know she is extremely wealthy, owns an expensive car and flat and is obsessed with gaudy fur coats. She also went to school with Anita yet somehow appears to have aged at twice the pace of her lovely classmate since then.  Oh, and her favorite color scheme is black and white. That’s about it. Not an extremely developed character to say the least. So, when she becomes obsessed with stealing Pongo & Perdita’s 15 newly born puppies to create a dalmatian skin fur coat, we don’t really know whether or not that is out of character for her. But that’s not my question. What I want to know is, why did this woman who has so much money need to resort to theft to procure a mere 15% of the raw material needed to produce said garment?

Some might say that she was already breaking the law having the article produced so what’s the big deal with adding complicity to her list of crimes? But I would say that explanation is barking up the wrong tree. If she had appropriated all of the canines through theft, you might be on the right trail, but she didn’t…only 15 were nicked.  I get that she cleaned out the local pet stores and there was most likely no more dalmatians in the surrounding boroughs, but surely there had to be some more in the next city over…or at least somewhere in England. Sure there was a time crunch to get the softest pelts, but a week or two to order a few more pups couldn’t have been an issue right? Why not have Horace & Jasper to drive a couple hours to a distant pet shop and pick up a few more dogs? But, no. Instead she chooses to hire these two boneheads to burglarize a close acquaintance she had recently had a confrontation with after a failed attempt to purchase their dogs. Is she trying to get spotted by the local police? There seems to be no other pawsable explanation that I can see. (I sincerely apologize for that last dog pun…)

I assume the day after the Return of the Lost Princess Celebration is National Pick Up the Lanterns Day. Sheesh, that’s a lot of trash. I would be hoping for a strong wind so it would be the neighboring kingdom’s problem.

This question nags at me every time I watch The Lion King. We see Simba & Nala running around as lion cubs and smile when Zazu informs them they are betrothed. We are somewhat ok when they get it on almost immediately after reuniting 10 years after Simba runs away. (still not a fan of Nala’s come hither look though). And we root for them as the new King & Queen of the Pride Lands after the defeat of Scar. But then the question hits you like a ton of bricks: are they brother & sister?

Before we continue I need you to remove the notion that we are just talking about ordinary lions and family structures are just different in the animal kingdom. Because we aren’t talking about ordinary lions. These are Disney lions. And they have been given human thoughts, feelings and voices and therefore we can judge their actions based on the laws and social conventions of human society. (At least that is what I tell myself. I’m not crazy right?) So, Mufasa is the King and Sarabi is the queen. They are happily married…or so it would seem. Also, Mufasa’s whole persona is wrapped up in morality. But is it possible that being surrounded by many other lonely female lionesses got to him? Maury, could he be the father?

If he’s not, it’s not too difficult to determine who it would be. At the end of the day, there are only two male lions in this group. If it wasn’t Mufasa, then it has to be Scar. Not only would that make them cousins, but then Simba ended up assisting in the murder of his uncle/father-in-law. Wow. So whether they are cousins or siblings, it would take a whole lot of Hakuna Matata to get past those family issues.

Not affiliated with the Disney Corporation. All image credit is given in each post at the bottom. Please don't steal my stuff. Use the share or reblog buttons or at least add a link back to my site if you are going to copy my ideas. Thanks!
Loading Comments...